Chef Vallery developed Peloton Catering as a way to spread the love of local ingredients to those who may not know or afford to use them. He was able to blend his love for culinary art, photography and wine all into one when this concept took off. The excitement of meeting new people, creating new menus, meeting new farmers and helping people create an experience is nothing shy of fulfilling to this team.

A native of California, Chef Vallery found perspective by electing to receive his formal training at the prestigious Culinary Institute of America, in Hyde Park, New York. While working toward a Culinary Arts degree (1998), Chef Vallery apprenticed at the Equinox Hotel in Manchester, Vermont, and the Quail Country Inn of Poughkeepsie, New York.

After returning to the  Bay Area, Chef Vallery, had immediate success as Sous Chef for the Marriott Hotel of Santa Clara, then Executive Chef for the Hilton Hotel of Santa Rosa. He furthered his knowledge as Sous Chef for the award-winning Seafood Brasserie, which opened at the Vineyard Creek Hotel in Santa Rosa in 2002.  During his stay with the Brasserie, Chef Vallery worked closely under renowned Chef, Liz Ozanich and was instrumental in assisting Chef Ozanich with final kitchen design and other facility elements.  Chef Vallery continuously represented the Brasserie at the Sonoma County Harvest Fair where he walked off with several awards. 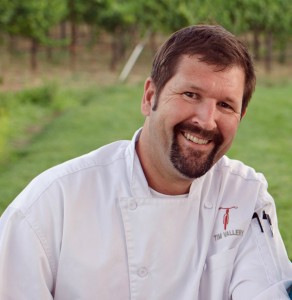 After becoming Executive Chef for Santa Rosa Golf  & Country Club, building a capable, as well as a fiscally responsible and efficient culinary team, Chef Vallery has only intensified his thirst for fresh culinary offerings and thoughtful food concepts.  To this end, Chef Vallery continues to receive accolades for his always numerous “Best of Show” Harvest Fair entries and he regularly participates in several other prestigious local events, including the Kendall-Jackson Tomato Festival and the Taste of Sonoma. Further, Chef Vallery is a regularly invited Guest Chef at the historic and influential Bohemian Grove. Chef Vallery has partnered with local wineries and breweries to raise funds for local organizations and non-profits and recently donated time and dinner to help raise money for the Sonoma Pride Foundation which is directly benefiting those locally affected by the wildfires of 2017. Chef Vallery and his team can be seen at Project Zin and Pigs and Pinot in Healdsburg which are fundraisers for children and down syndrome.

Owning Peloton Culinary & Catering for over ten years now, Chef Vallery is frequently invited back to prestigious wineries and venues to execute events of all kinds. Vallery and the team at Peloton focus on wine, craft beer, spirits and food focused events all around the North Bay and San Francisco Bay Area.

Chef Tim Vallery of Peloton Culinary & Catering will your create a custom menu for your event that will meet your budget and exceed your expectations. Peloton is local and we support local. Each menu is unique and created for your event. Chef Tim will use the best seasonal ingredients wine country has to offer creating dishes that are as stimulating to the eye as they are to the palate.

We use ingredients within the 100 mile radius. Whenever possible, we source right from our backyard- supporting local farmers and producers to bring the most elegant and unique farm-to-table meals to our clients, for the ultimate wine + beer country experience.

With Google+ plugin by Geoff Janes